The SREB is part of the Belt and Road Initiative, being a development strategy that focuses on connectivity and cooperation between Eurasian countries. Essentially, the SREB includes countries situated on the original Silk Road through Central Asia, West Asia, the Middle East, and Europe. The initiative calls for the integration of the region into a cohesive economic area through building infrastructure, increasing cultural exchanges, and broadening trade. A major part of the SREB traverses Asia’s high-altitude areas, also referred to as the Third Pole or the Asian Water Tower. In the light of the planned development for the SREB traversing the Third Pole and its immediate surroundings, the “Pan-Third Pole Environment study for a Green Silk Road (Pan-TPE)” program will be implemented.

The project will assess the state and fate of water resources in the region under following research themes:

1. Observed and projected Pan-TPE climate change
2. Impacts on the present and future Water Tower of Asia
3. The Green Silk Road and changes in water demand
4. Adaptation for green development

HI-AWARE is one of four consortia of the Collaborative Adaptation Research Initiative in Africa and Asia (CARIAA). HI-AWARE aims to contribute to enhanced adaptive capacities and climate resilience of the poor and vulnerable women, men, and children living in the mountains and flood plains of the Indus, Ganges, and Brahmaputra river basins through the development of robust evidence to inform people-centred and gender-inclusive climate change adaptation policies and practices for improving livelihoods. 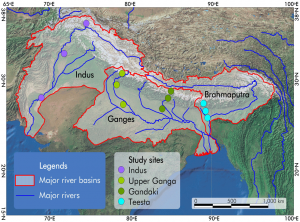 HI-AWARE will focus its activities in 12 sites, representing a range of climates, altitudes, hydro-meteorological conditions, rural-urban continuum, and socio-economic contexts in four study basins: the Indus, Upper Ganga, Gandaki and Teesta. It will conduct research in these sites, including modeling, scoping studies, action research, and randomized control trials. It will test promising adaptation measures in observatory labs at the sites for out-scaling and up-scaling. It will also conduct participatory monitoring and assessment of climate change impacts and adaptation practices to identify: 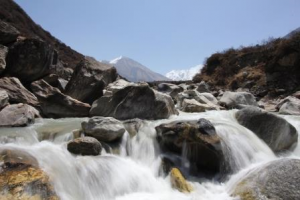 FutureWater’s main tasks focus on biophysical drivers and conditions leading to vulnerability to climate change. Key tasks are to:

Water is becoming an increasingly critical factor in Asia. The catchments of Hindu – Kush Himalayan (HKH) are a source of a significant portion of this water. Glaciers are a component of the HKH water budget. There is general agreement that a widespread retreat of the global ice cover has been occurring since at least the late 1800s. However, a consensus view of the significance of this retreat in terms of factors determining glacier mass balance, or the resulting water resources and general environmental impacts has not been reached for the HKH mountains. It is believed that only a combined effort of local observation, remote sensing and simulation modeling can lead to a better understanding of what’s happening. Especially the modeling is essential to provide projections for the future.

The Indus basin is a densely populated area and water supplied by the Indus River is extremely important for agriculture, domestic use and hydropower production. The Indus is largely dependent on melt water generated in the Himalayas, Karakoram and Hindu Kush mountains. Understanding of the hydrological regimes in the mountainous Upper Indus basin (UIB) is essential for water resources management in the region.

It is highly likely that future climate change will impact future water availability in the Upper Indus river basin. Temperature increases and changes in the timing, magnitude, and phase of precipitation will alter the timing and contribution of snow and ice melt.

High-resolution gridded meteorological datasets, which capture the spatial variability of precipitation, are critical for modelling the hydrology of high-mountain regions. In the Upper Indus Basin (UIB), previous modelling studies have demonstrated that snow and glacier melt are major contributors to stream discharge, and on daily or seasonal scales can play even larger roles. However, hydrologic models suffer from a lack of gridded input climate data which accurately reflects the topographic complexity and spatial variability in precipitation. Improvements to existing gridded datasets using high-elevation station data will increase the reliability of hydrological models in the region. FutureWater’s Spatial Processes in Hydrology (SPHY) model will be updated and recalibrated to improve understanding of the stream flow composition in the basin and to provide better estimates of the future water availability, by forcing the model with downscaled CMIP5 general circulation models.

Summarizing, the three main goals of the project are:

Global warming is considered as one of the major threats for the world’s population and coping with it may be one of the largest challenges for this century. Multiple attempts to streamline global policy on climate change mitigation have been made over the past decades, and the “Paris Agreement” which was signed at the 21st Conference of the Parties in 2015 is considered a major breakthrough in formulating adequate measures to tackle climate change. Governments agreed on “a long-term goal of keeping the increase in global average temperature to well below 2°C above pre-industrial levels”, and “to aim to limit the increase to 1.5°C, since this would significantly reduce risks and the impacts of climate change”. In response to this development, the Intergovernmental Panel on Climate Change (IPCC) will publish a Special Report on global warming of 1.5 °C above pre-industrial levels, and is gathering scientific content for this report.

Warming of the climate system is unequivocal. The atmosphere and ocean have warmed, the amounts of snow and ice have diminished, sea level has risen, and the concentrations of greenhouse gases have increased. The Himalayan region (after Antarctica and the Arctic) has the third largest amount of ice and snow in the world, and is exceptionally vulnerable. The various Global Climate Models (GCM) predict very similar future temperature trends for the region, but projections of future precipitation patterns differ widely. As a consequence, the need for increased knowledge about future climate change remains high. The main focus of GCMs thus far was on temperature increases and potential changes to the hydrological cycle. The overall tendency that has emerged is that wetter regions are likely to become wetter and drier regions drier. Increased scientific knowledge, coupled with recent weather events, show that changes in hydrological extreme events can be substantial and the geographical and temporal resolution of predicted changes remains low in many areas.

For Statkraft, as the largest generator of renewable energy in Europe and a leading company in hydropower internationally, an understanding of future changes to the hydrological cycle and its uncertainty is crucial for effective business planning. Investment decisions regarding the business strategy for the next 50 years depend on accurate predictions of climate change impacts on inflow over that period.  In addition, changing probabilities and magnitudes of extreme events can put additional risk on infrastructure (dams and hydropower plants) or on other crucial infrastructure (roads and transmission lines).  Statkraft’s intention to grow in the region makes it necessary to assess short, medium and long-term impacts, risks and opportunities resulting from climate change, to ensure sustainable management of the water resources for all stakeholders. Currently, Statkraft’s main business focus lies with northern India (mainly the state of Himachal Pradesh) and Nepal, while Bhutan and Myanmar might be areas of future business development as well.

Through the International Centre for Integrated Mountain Development (ICIMOD), the inter-governmental learning and knowledge sharing Centre serving the eight regional member countries of the Hindu Kush Himalayas (HKH), FutureWater provided a comprehensive review study on climate change and the impacts on cryosphere, hydrological regimes and glacier lakes in the Indus, Ganges, and Brahmaputra river basins. This review study was done in the context of future hydropower development in the region.

ICIMOD is the implementing agency for the Himalayan Climate Change Adaptation Programme (HICAP) that runs from January 2011 to December 2015. HICAP addresses climate change adaptation challenges across different related disciplines such as water resources, ecosystem services, food security, vulnerability and gender. Part of the project is related to the generation of water availability scenarios from upstream river basins that are primarily characterized by snow and glacial melt. ICIMOD has contracted FutureWater to generate these scenarios based on a high resolution hydrological model that FutureWater has developed. The project runs from January 2012 until June 2013. FutureWater will generate climate change and water availability scenarios for the upstream parts of the Indus, Ganges and Brahmaputra river basins.

With the overall goal to improve our knowledgebase on climate change impact on water availability and demand in the upper parts of the Indus, Ganges and Brahmaputra basins, the specific objectives of the proposed study are to: