The Hindu Kush-Himalayan region is highly dynamic as there are many socio-economic and environmental drivers at play, including climate change. The impacts of these changes challenge the resilience of natural and human capacities and environments in the region. Recent studies have shown that the Himalayan region and the downstream areas that depend on its water supply and ecosystem services are particularly vulnerable to climate change. In order to study the contributing roles of snow, glaciers, precipitation and groundwater to the total water resources, and how these roles might change in the future, a hydrological model is required that includes cryosphere and mountain hydrology.

FutureWater collaborated during recent years with the International Centre for Integrated Mountain Development (ICIMOD) in developing the Spatial Processes in Hydrology (SPHY) model, which is available in the public domain. ICIMOD intends to make this model accessible to its partner institutions in the region and for this in collaboration with FutureWater a user friendly interface and training modules have been developed. A first successful training course was provided to regional experts in December 2014. A follow-up second course was now organised from 14 to 18 December 2015 at ICIMOD in Kathmandu, Nepal, taking the subject further, including newly developed interface components which were developed in response to possible improvements pointed out by the users. 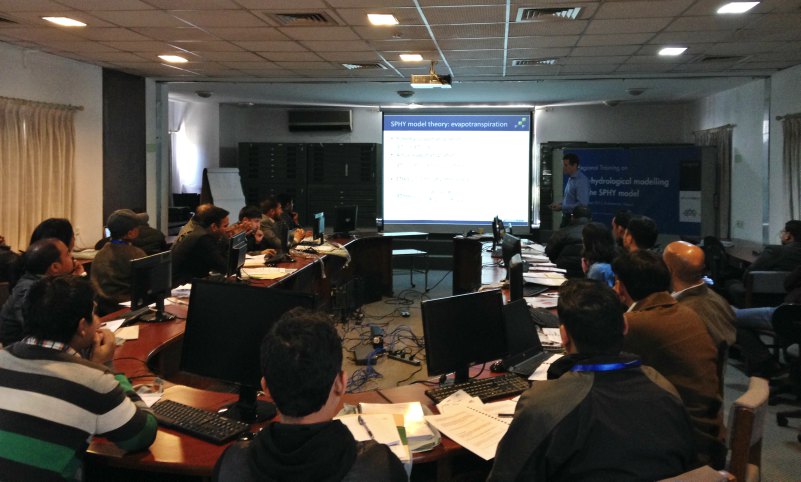 The overall objective of this training was to ensure that SPHY can be applied by a wider range of experts with basic hydrological and computer skills, by further developing the user interfaces, including a data preprocessing tool. The user-interface now allows changing model input parameters and maps, select model output to be reported, run the model, and analyse the model output. The newly developed preprocessing tool allows users to setup their own models easily by selecting a rectangular model extent and spatial resolution after which the software preprocesses input data from a predefined database and the SPHY model is ready to run. The newly developed interfaces come with manuals of the underlying theory and hands-on training case studies.

More information about the SPHY model as well as model documentation, tutorials and software downloads c an be found on the SPHY website.